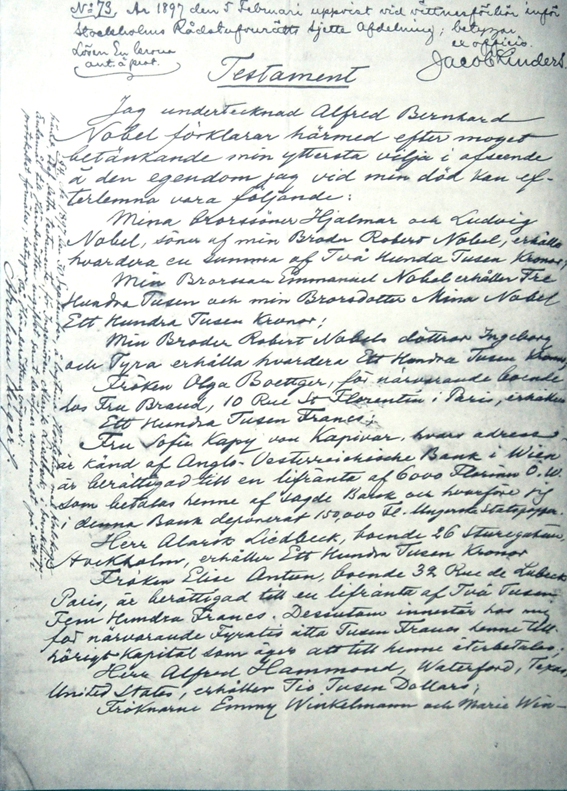 "Dr. Alfred Nobel, who became rich by finding ways to kill more people faster than ever before, died yesterday." So read an obituary, headed Le marchand de la mort est mort ("The merchant of death is dead") published erroneously in 1888 at the passing of Nobel's brother Ludvig. Some say that it was this attack on his person that prompted Nobel to forsake a slew of money-grubbing relatives and put aside the bulk of his estate in a last will and testament signed on 27 November 1895, to establish the Nobel Prizes. An excerpt from his will reads: "I regard large inherited wealth as a misfortune, which merely serves to dull men's faculties. A man who possesses great wealth should, therefore, allow only a small portion to descend to his relatives. Even if he has children, I consider it a mistake to hand over to them considerable sums of money beyond what is necessary for their education. To do so merely encourages laziness and impedes the healthy development of the individual's capacity to make an independent position for himself."


Nobel was the inventor of dynamite, a feat which gained him the malignant moniker mentioned in the misplaced in memoriam.
When Nobel died of a stroke at his villa in Italy in 1896, the contents of his will were disclosed. The document, penned by hand on a yellow notepad, was legally deficient, a symptom of Nobel's deep mistrust of lawyers to whom he referred to as "niggling parasites". Nobel refused legal help and wrote the will himself.
Two of Nobel’s young engineers, Ragnar Sohlman and Rudolf Lilljequist, were named as executors. They were charged with collecting Nobel’s assets for removal back to Sweden before French authorities could make claim to the money. His shares, bonds and documents were taken to the Swedish consulate in Paris by horse-drawn cab.  Sohlman carried a revolver ‘at the ready in case of direct attack’.
Sohlman and Lilljequist  were instructed to form a Foundation to manage the funds. They were met with passionate resistance from Nobel's slighted nephews, the sons of his older brother Robert, who, upon discovering that Nobel had  significantly decreased the portion of the fortune which they were to receive, challenged the will and tried to have it declared null and void. Oscar II, King of Sweden, made matters worse by dismissing Nobel’s wishes as "nonsensical" and "not patriotic minded" since his property would be dispersed internationally (Nobel's will stated: "no consideration whatever shall be given to the nationality of the candidates, so that the most worthy shall receive the prize, whether he be Scandinavian or not.") Emanuel Nobel, however, another of Nobel's nephews who ran the family's oil business Branobel from Baku in Russia told Sohlman about the Russian concept that the executor is "the spokesman of the soul" of the testator. On May 29, 1898, Nobel's heirs signed a reconciliation document enabling lawyers and accountants to proceed with the execution of his will. King Oscar II recanted his disapproval when he realised that the publicity might benefit Sweden.  He handed out the prizes to the first laureates on December 10, 1901, the fifth anniversary of Nobel’s death.