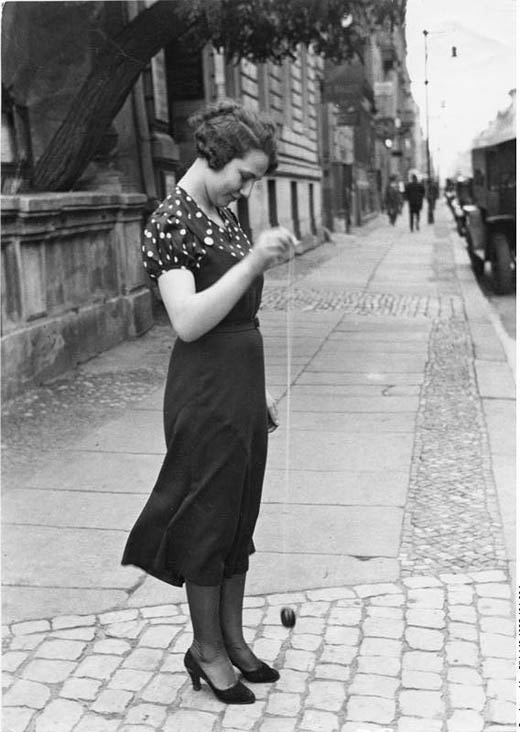 According to yo-yo.com, the yo-yo has been around for a very long time. The oldest surviving yo-yo dates as far back as 500 BC, when the Greeks fashioned them from terracotta discs. One theory is that they were used as offerings in rites of passage to signify a child's crossing over to adulthood.

It is the name yo-yo that stuck, but the toy was also known to the English by the French bandalore and quiz. The French called it incroyable, de Coblenz, l'emigrette and joujou de Normandie. Joujou means 'little toy' in French and is a possible origin of the word yo-yo, although an entry in Webster's Collegiate Dictionary states that its origins lie in the northern Philippine Ilokano language, and Panati's Extraordinary Origins of Everyday Things says that the word means 'come-come' in Tagalog, an Austronesian language spoken in the Philippines, where the yo-yo was used as a weapon.

For 2 500 years demand for the toy, the second oldest in the world (the oldest is the doll) has, well, yo-yoed. In the 1930s, when the Lego company was left with excess stock they were forced to saw the unsold toys in half and use them as wheels on toy trucks and cars. The first US patent for the yo-yo was issued on November 20, 1866 to James L. Haven and Charles Hittrick of Cincinnati, Ohio, who described it as an improvement on an existing design. Although they referred to it as a "whirligig" it had the familiar construction of a yo-yo – "two disks coupled together at their centres by means of a clutch" – and was weighted around the rim to improve momentum. The yo-yo did not become the faddish plaything we know today until 1928 when a Filipino American named Pedro Flores opened the Yo-yo Manufacturing Company in Santa Barbara, California. By November of the following year, Flores was operating two additional factories in Los Angeles and Hollywood, which together employed 600 workers and produced 300 000 units daily. An entrepreneur named Donald Duncan bought the concern from Flores for $250 000, an amount that he managed, despite it being a big outlay by depression era standards, to win back many times over. Duncan eventually lost the rights to the trademark yo-yo in 1965 when it was decided that the word had become part of common speech. He sold the business and all its trademarks to The Flambeau Plastic Company and concentrated his efforts instead on manufacturing parking meters.