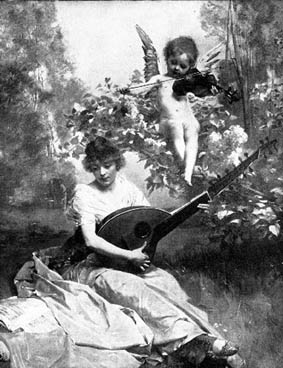 Back in ancient Rome, when February fell later in the year, around the time of the beginning of Spring in the northern hemisphere, Valentine's Day was a very different affair from the Hallmark Holiday it is today. In his Life of Caesar, Plutarch describes a festival of purification and fertility called Lupercalia, which was celebrated on February 15: "At this time many of the noble youths and of the magistrates run up and down through the city naked, for sport and laughter striking those they meet with shaggy thongs. And many women of rank also purposely get in their way, and like children at school present their hands to be struck, believing that the pregnant will thus be helped in delivery, and the barren to pregnancy."

Lupercalia, the Wolf Festival, began with the sacrifice of two male goats and a dog, directed by the Luperci, or "brothers of the wolf", priests of Faunus. Once the sacrifices had been dispatched their blood was smeared on the faces of Luperci initiates with sheep's wool soaked in milk, and thongs known as Februa (the origin of the name February) were cut from the skin of the animals and handed to the initiates who would run around in the streets whipping people with them (Plutarch's "shaggy thongs"). Shakespeare's Julius Caesar begins during Lupercalia with Caesar instructing Mark Anthony to strike his wife Calpurnia, in the hope that the act will cause her to conceive. It was 44 BC; Anthony used the celebration to offer Caesar a diadem, which he refused – a portent of his death the following month.

Lupercalia survived for at least the next five centuries. Roman armies took the Lupercalia customs with them as they invaded France and Britain and some of these served their needs particularly well. A Lupercalia lottery, where the names of maidens were placed in a box and drawn by young men, may explain the sending of anonymous Valentine's letters. Each man accepted the girl whose name he drew as his lover for the duration of the festival.

In the year 496, Lupercalia was abolished by Pope Gelasius I, who mocked those senators who insisted on preserving it: "If you assert that this rite has salutary force, celebrate it yourselves in the ancestral fashion; run nude yourselves that you may properly carry out the mockery."

The loss of such an important festival left a significant void in the calendar. Gelasius promptly appointed St Valentine as patron saint of lovers and declared that the holiday would be celebrated on February 14. The lover's lottery was replaced with a Christian version; the feast of St. Valentine featured a lottery of Saints. Worshippers would pull the name of a saint out of a box, and, for the following year study and attempt to emulate that saint.

Illustration for “O, Lay Thy hand In Mine, Dear”  from “World’s Best Music” (1900) edited by Helen Kendrik Johnson. The woman in the illustration plays a 16-stringed sitar or guitar, likely a chitarrone. Behind her a cherub plays the violin.