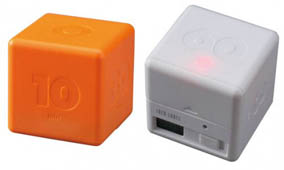 Cube time
A company called Idea has invented a kitchen timer that eliminates the need for fiddling with knobs and dials when your hands are covered in dough. All you need do is turn the cube so that the required time – inscribed on each of the cube's six faces – faces upwards. The cube, available from aplusrstore.com, can also be used to time your shower or keep you from napping for too long. 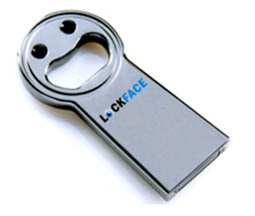 A new USB drive introduced by Japanese company Futen, uses face recognition technology to check the identity of the person using it. Once you have taken a few pics of yourself, Lockface will verify your face via your webcam each time you need to access the data stored on the drive. According to Futen, the device has an error rate of about 2% (it verifies the "wrong" person in 1.91% of cases and refuses to verify the right person in 1.98% of cases). Lockface does have the option to use password encryption, just in case an attack by a swarm of bees renders you unrecognisable. The 4-gigabyte Lockface is only available in Japan (try the Japan Trend Shop, japantrendshop.com if you are interested) and costs around R850. 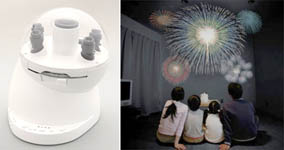 Future fireworks
As the owner of a somewhat neurotic dog who refuses to venture outside for her evening wee on New Years' Eve, I feel that restrictions on the use of fireworks is a good. If you are dead set on making big bangs, there alternatives that will not terrify animals or set fire to your garden. Sega Toys has created the Uchiage Hanabi, a fireworks projector that uses 5 projection lenses to blast moving and animated exploding fireworks onto your walls and ceiling. It even tracks the rocket from launch to explosion, so you can watch it just like a real show – in your lounge, all year round, rain or shine. The projector costs just over a thousand bucks and is available from the Japan Trend Shop.

NoPoPo stands for No Pollution Power and is the name of a battery that derives its charge from liquid. Charging the NoPoPo is simple: suck up your liquid of choice – anything from Coca Cola to urine – with the syringe supplied, and squeeze it into the battery. Apart from being convenient, the NoPoPo batteries are good for the earth, since they are made with 100% non-toxic materials and a ten-year shelf life. (japantrendshop.com) 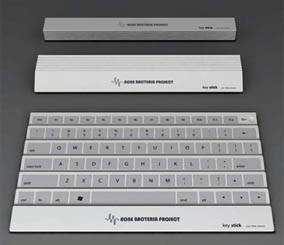 Keyboard fan
The Keystick keyboard by designers Yoonsang Kim and Eunsung Park folds up like a fan when you don't need it. It is still in its conceptual phase, but could be a good alternative to roll-up keyboards which tend to feel mushy in comparison with the real thing.